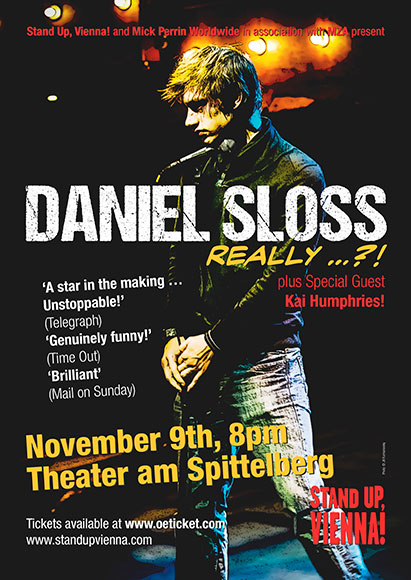 After a year-long hiatus we are happy to be back and – literally – pick up where we left off! Back by popular demand, STAND UP, VIENNA is proud to present the next generation of Stand-Up Comedy for the second time:

The NEW smash-hit, hilarious show from live comedy’s internationally acclaimed and award-winning half-man-half-Xbox comes to Europe!
Daniel is one of the biggest comedy artists at the Edinburgh Festival Fringe and even though he is only 24 years-old he has sold out all his shows there. In fact, over the past 8 years he has performed to tens of thousands of people in Edinburgh, breaking box office records. He has also toured extensively through the USA, UK as well as Australia and appeared on TV shows including ‘Sunday Night at the Palladium’, ‘John Bishop Show’ and ‘Conan O’Brien’ and released a live DVD.
Last year Daniel’s first European Tour was a smash-hit with many shows selling out in advance – including a fabulous gig at Vienna’s Stadtsaal. This year Daniel will perform in sixteen different countries with his new show REALLY…?! – so make sure you BOOK EARLY! *
* Plus Special Guest Kai Humphries